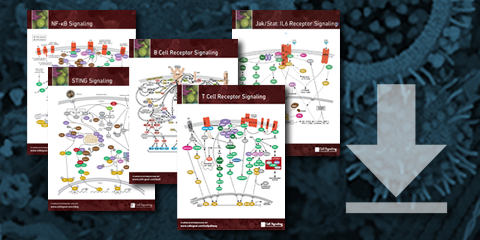 Cell fate is determined through the regulation of cytokine production, cell survival, proliferation, and differentiation. Many of these signaling cascades are promoted throughT Cell Receptor (TCR) activation.

Flow cytometry is a strong technique for analyzing immune cells in a heterogenous population. Investigate T Cell Receptor Signaling with conjugates relevant to T Cell Signaling and validated for use by flow cytometry.

The complexity of B cell antigen receptor (BCR) signaling permits many distinct outcomes, including survival, tolerance (anergy) or apoptosis, proliferation, and differentiation into antibody-producing cells or memory B cells.

The Jak/Stat pathway mediates the effects of cytokines, like erythropoietin, thrombopoietin, and G-CSF, which are protein drugs for the treatment of anemia, thrombocytopenia, and neutropenia. The pathway also mediates signaling by interferons, which are used as antiviral and antiproliferative agents. Researchers have found that dysregulated cytokine signaling contributes to cancer.

Immune signaling can be activated by cancer cells via adapter proteins like STING, which leads to dendritic cell maturation and the priming of CD8+ cells.

The inbuilt control mechanisms of the immune system that maintain self-tolerance and prevent collateral damage during a physiological immune response are referred to as immune checkpoints.

Please fill out the form to download your pathways: